The Four Types of Titles: Which is best for your story? 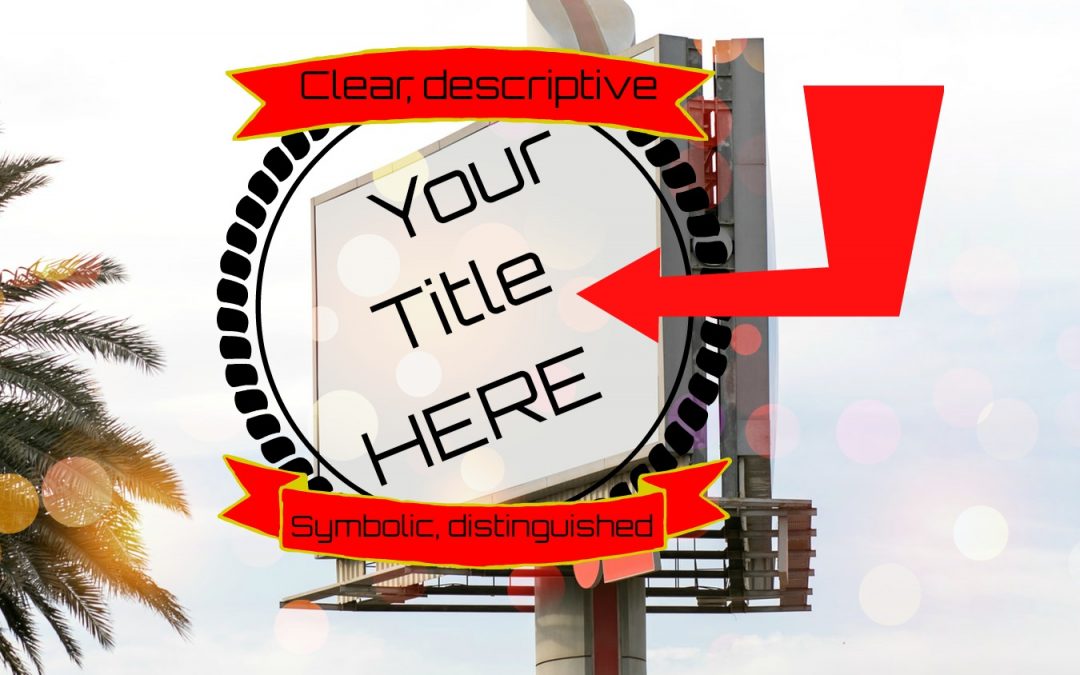 When I wrote my first original short story in fifth grade, I gave it one of the most cockamamie titles I’ve ever thought up. What was it? It was called, “Watch Out Here, Watch Out There, Watch Out Everywhere”. Not only was it long-winded, confusing, and wordy, it baffled even me. And I wrote the story! To this day, I’m haunted by that cringy title. There was substantial room for improvement, such is the wisdom I wish to impart with today’s blog.

I don’t think it’s a secret that titles are among the hardest decisions in writing. Aside from the cover art, it is one of the first things that your readers will see. Depending on their preferences, it can ensnare or scare them away completely if there’s a word or phrase they don’t like. To make matters even more complicated, the rules change depending on the genre. Certain stories within the same realm have patterns that you can identify and copy, as they always seem to work. For example, in the sci-fi genre, stories will often be named after their setting (planet, ship, or galaxy). Whereas in fantasy, you’ll commonly see the words tales, chronicles, saga, or kingdom tacked onto the end. This makes choosing a title seem mechanical, but in truth, it is far from. A title can be anything you want; your imagination is your only inhibitor. Though there’s something of a scheme you should know.

I’ve narrowed down all kinds of titles into four simple categories. Here we’ll discuss each one’s strengths, weaknesses, and identify which genres work well with each.

The four types of titles are the: clear title, the descriptive title, the symbolic title, and the distinguished title.

Let’s begin with the clear title, arguably the easier title to use if you’re looking for a proxy or desire to keep it simple.

With the clear title, a story will often have the ability to be summarized in a single word. Take the popular television show House as an example. This is an example of a clear title: it is a single word, the main character’s name, and conveys that the show is about him. That’s all the audience needs to know going in. Other examples include Amy, Dracula, the Divergent trilogy, Eragon, and Jane Eyre. This type of title can work with any genre but is especially effective with children’s books, biographies, and any books whose story overtakes a large setting or time period, like James A. Michener’s Alaska.

The descriptive title is one of my personal favorites to use when writing, but frankly, it is a slippery slope. The reason you have to be careful with descriptive titles is because they can drag on, and may reveal too much information about the plot. Something like The House with a Clock in Its Walls serves as an example of a good descriptive title. It tells you what the setting is and an important detail, but not enough for you to make assumptions about the ending with any accuracy. All you know is there’s a house with a clock inside the walls. Another good example is the How to Train Your Dragon series by Cressida Cowell. There are dragons, they are getting trained. That’s all you know. The descriptive title works well for fantasy, horror, and thrillers (i.e. The Girl on the Train), but is suited to action, drama, and adventure as well. Just be sure to keep them short. Don’t stretch out the title like Corey Taylor’s A Funny Thing Happened on the Way to Heaven.

As a lover of fiction, the symbolic title is one I see used all too often. Not always to great effect. The symbolic title is the so-called double-edged sword of titles because it’s easy to convey so much with so little, but whether it’s a metaphor or another string of words, the meaning may get lost. Popular examples of symbolic titles would be To Kill a Mockingbird by Harper Lee, Atlas Shrugged by Ayn Rand, and Fahrenheit 451 by Ray Bradbury. The meaning of all these titles is not obvious at first, and you must read to understand what their deeper meaning is. This is both a strength and a weakness, as some people do not want a deep, emotional journey. Rather they just want a fun story over 250 pages. For the readers that do want to understand, it’s virtually impossible to forget the title thereafter. Popular genres that use this title are drama, romance, and philosophy, but are commonly used in sci-fi and historical pieces as well.

What exactly is a distinguished title? A distinguished title is a type of title that bears similarity to something already popularized but has enough original deviation to standout as its own entity. One of the most common examples of distinguished titles would be the long-standing rivalry between Star Wars and Star Trek. The similar titles forces association between the two, and creates this margin where neither one is separated from the other. A distinguished title is also rather hard to create because it requires you to produce a word or phrase that encompasses everything about your story that you want the audience to know up front. This can be a challenge, and will not typically come in a day. You must also be careful not to plagiarize titles. Due to similarities between your story’s title and theirs, you’ll sometimes be accused of copying something (also known as a cash-in). Though book titles cannot be copyrighted, seeing something like The Lost World published under two different authors, Sir Arthur Conan Doyle and Michael Crichton, reminds us that distinguished titles must have some originality. There is no defined genre that fits the distinguished title, it is applicable to any story or book that you’d want to closely associate with an already popular piece. Just remember to differentiate it.

It is worth noting that just because a certain genre follows a pattern with its titles doesn’t mean that these rules guarantee a book’s success. The beauty of titles is that they can be whatever you want, and there’s nothing stopping you from choosing anything you want. As the author, you know what word(s) best represents your story to the readers. If it’s one word, two, or seven. In my opinion, keep it under six words. Also, don’t be afraid to change titles throughout the process. The title only matters once you’re ready to begin marketing. As you write the story, read back over it. Perhaps there’s some hidden meaning that you as the author missed? Has the story taken shape in a way that makes a different title more applicable? Personally, I cannot work on a story unless I have something to call it. But not everyone is like me. Write your story your way, you can even learn how here! Great titles take time, so do not be discouraged if it doesn’t come to you right away. Sometimes the title will even choose itself.

With this new information, you’ll be better equipped to share your story with a title you can be proud of! Your story is your child, so give it a name it’ll wear proudly!