How to identify and fix fluff in your story. 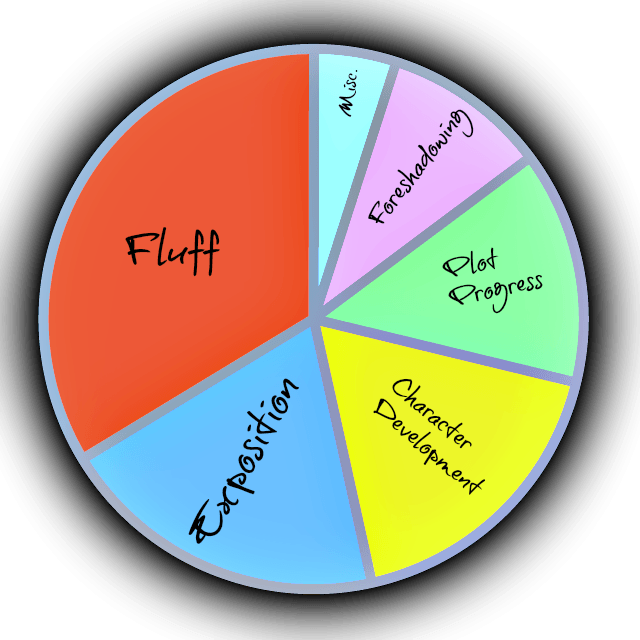 Have you ever picked up a rather hefty book and thought, “There’s no way all this needs to be here.” I know I’ve certainly done that when I saw James A. Michener’s Alaska for the first time, or Ayn Rand’s Atlas Shrugged.

As you read, you start to understand the purpose of every section. This one tells us an important part of the protagonist’s character, this part is to worldbuild so that a scene makes contextual sense later, whereas other scenes are inserted purely for foreshadowing, or used to diversify the tone so that a sequence isn’t hammered down by narrative stagnation. Every scene must have a purpose. And if it doesn’t, it has to be removed. I know what it feels like to write an entire book, and then go back and read through only to realize that you can cut out half of it. But how do you identify fluff in your story? Do you cut out an entire chapter, a page, or just a paragraph?

To start, it’s important to mention that this is why you want to have an editor look at your story. No matter the length, an editor will approach your story with a neutral understanding of what you’re trying to say. They won’t have the protective, parent-like lens that you do. When they read, if they get confused, concerned, or bored, it is their job to tell you why and how they think it can be improved. Take for example:

Jim is having a problem in his relationship, so he begins by speaking with his parents. They offer advice on how they made their relationship work, and then he goes and confides in his friends. This cheers him up, so then he goes to the grocery store to make dinner for his love and he comes home to a partner that’s indifferent towards him, despite his kind gesture. They get into an argument over this and Jim ends up frustrated and alone that night as his partner leaves the house.

Just looking at this example, you can probably already identify the part that can be taken out. Which part is unnecessary fluff? It’s the part with him going to the grocery store, isn’t it?

Actually it’s the part where Jim goes and speaks to his friends about his problem. Conversely, it could also be the part where he speaks to his parents. In this scenario, the problem is redundancy. Jim goes and confides in two separate groups of people when, for story purposes, he only needed one. The main argument you’ll see in defense for this type of repetitive writing is that Jim needed multiple perspectives before deciding how to act. In reality, what this does is displace Jim between scenes and introduces us to characters that do not relate to his situation, and he winds up feeling more confused than before because now he has too many perspectives. Remember that writing must be concise and effective. Jim could easily have gotten multiple perspectives from either party and then been on his way to the grocery store while he compiled his thoughts and decided which action he wanted to take.

Why then isn’t the grocery store the fluffy scene? Simply put, that part isn’t a scene itself. It is only a transition. You shouldn’t have to state in plain detail what aisle he’s in, what he’s grabbing, or what the person in front of him looked like in the checkout line. That is the quiet time Jim has to ruminate on everything one of the two parties said, while moving into the next part. The scenario would be better if it went more like this:

Jim is having a problem in his relationship, so he speaks with his parents or friends. They offer advice on how they made their relationship work, and this cheers him up. He goes to the grocery store to make dinner and he comes home to a partner that’s indifferent towards him, despite his kind gesture. They get into an argument over this and Jim ends up frustrated and alone that night as his partner leaves the house.

Another easy way to identify fluff in a story, regardless of length, is to ask yourself a simple question: if I cut it out, would anything change? If you have a rather long fantasy novel for example, not every scene is going to be paramount to the development of the story. As an author, it is your responsibility to balance the action with the build-up across the novel. If the whole book was spent sitting in an inn talking, only to then have the main villain show up at the doorstep, people would claim that the plot felt forced, or lazy. Make sure that every scene contributes something to the story, or else it needs to be cut. That ten-page long sequence of your side character explaining their childhood can be necessary, but make sure there are some important details about their past in there, and maybe some details that can be used to foreshadow their actions later in the story.

In summary, any scene that does not add to the story can and should be removed. It takes up space within the narrative and only distracts the audience from what you are trying to say. As I mentioned above, lack of purpose and redundancy are the two big things you need to be aware of when looking for fluff. Have an editor give you that second opinion so you can look at your book critically as opposed to adoringly. It can be hard sometimes to let go of certain scenes, but keep in mind that cut is not the same as change. If you want to keep a scene in, but it currently serves no purpose, then give it purpose! Don’t worry about changing around the story if rearranging would damage the structure you already have. You can always recycle a scene idea and place it elsewhere when it would have meaning. There are many things you can do to hold onto your ideas, which we will cover in a future blog.

Contact your editor, your publisher, your most trusted friend. Let them read your story and invite them to be honest. They have a critical eye, and they’ll help you realize the vision you had for your story. Even if it means storing away an idea and bringing it back when it could have a greater impact.